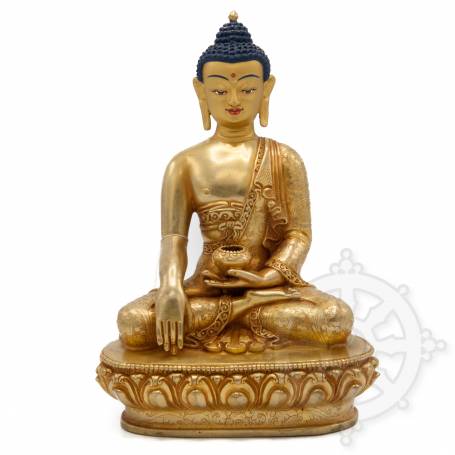 Unique piece, gilded with fine gold representing Shakyamuni Buddha, taking the earth as witness of his Enlightenment. The face of the statue and simpl...
$1,397.82

Based on 0 customers advices.

Unique piece, gilded with fine gold representing Shakyamuni Buddha, taking the earth as witness of his Enlightenment. The face of the statue and simply mesmerizing! You will notice the accuracy of the statue as a viewing stand, fine engraving and the multitude of details taken in building the statue. It is a pure wonder issued from the highest craftsmanship!

The Shakyamuni Buddha is here represented in a sitting position, with his right hand resting on his right leg and his fingers pointing towards the ground. It is the "Mudra Bhumisparsha" which means "touch the ground" or "take earth as witness". The left hand is resting on the knee with the palm facing upwards.

This statue represents an important event in the Buddha's life when he attains Enlightenment uder the Bodhi tree. After the Buddha had overcome the many temptations of Mara and attained Enlightenment, Mara challenged the Victory for a lack of witness. The Buddha then extended his right hand to the earth. The latter began to tremble, witnessing the Ultimate Realization of the Buddha and the demon king disappeared.

The statue bears the major marks and minor signs of a fully awake Nirmanakaya manifestation. The perfection of the Buddha's state is expressed even in the characteristics of his body, which is traditionally attributed to 32 major marks and 80 minor signs. Here are some of the marks you can find on the statue: Check the quality of the work entirely handmade: a precise hammering, a sharp engraving and edges finely chiselled raise. Just by looking at details such as the eyes, the robe, the peaceful face and the beautiful lotus brings exaltation to the heart of the practitioner.
This unique piece is unfortunately only rarely found nowadays. The Shakya clan is accredited for introducing the lost-wax method in Nepal since generations to create their sculptures. The master sculptor, Mr. Siddhi Raj Shakya, enjoyed all his life an outstanding reputation for his art. He helped many disciples hone their skills to shape their own style and establish their own reputation in this elite group. Customers of Mr. Siddhi Raj Shakya were from the royal family of Bhutan to the highest Tibetan lamas. This unique statue proposed to you was carried out by one of his followers. If you want to know more about the statues, go in 'Dharmatèque'.

Making a statue is the work of various specialist craftsmen in: wax casting, metal casting, engraving and eventually 24k gold gilding and / or stone setting.

Each of these steps must be performed with excellence to produce statues of the highest quality. The lost wax method is the oldest and most refined method used by sculptors in Nepal. All statues of the-dharma-store.com are made using this technique.

When the lost wax method was first introduced in Nepal, the castings were made only in brass but with time and technology, the casting has been realized in various metals such as silver, gold, etc. .
When the statue is poured, an engraver craftsman precisely carves the statue to set off the symbolic ornaments of the statue.
Then comes the artisan gilder who will use different techniques to completely or partially gild the statue. Finally, it is usually a thangka master that will come to bring the final but essential touch of the painting of the face and ornaments.

The Shakya clan is accredited for the introduction of this method in Nepal and for generations, they use this method to create their sculptures with some other families from Nepal.

As it is a visualization practise medium, we double checked the accuracy of the statue. Each piece is a magnificent work of craftsman who is here realized! This is a quality piece brought to you by the-dharma-store.com.

If you want to know more about the statues, go to the section 'Dharmatèque'.

Advises for your statues

The statues of the Buddha are so popular today that they are present everywhere on the globe: in restaurants, offices, gardens, calendars, etc. However, one must never forget the main message conveyed by these representations: the Buddha's teaching on compassion, love, generosity and understanding.

It is therefore necessary to pay respect vis-à-vis the representations of the Buddha as with any religious representation. We remind you here some ethical rules:

These are a few non-exhaustive rules of Buddhist ethics that you are free to respect or not.

It is important to bless and consecrate a statue to give it a "soul" and allow the energy of the deity to take place in the statue.

The statue, once consecrated, becomes a living entity and allows to bestow its blessings to the one who possesses it. It becomes sacred and must always be respected as an incarnate deity. The consecration of a statue is most often done in a Buddhist monastery by a Lama(*).

The consecration is a Buddhist blessing ritual in which the statue is first purified. Then the object is filled with Himalayan sacred herbs, medicinal plants, incense, mantra, mandala, precious stones, relics, amulets and other small sacred objects ... Then a ceremony of blessing / puja is organized towards the deity so that the Buddha invests all his power and his benefits in the statue.

In monasteries, the consecration usually ends with the ceremony of the Buddha's eyes opening. It is a matter of opening the eyes and thus giving a soul to the statue by painting his eyes, sometimes accompanied by the hair. Nowadays, too few monasteries host master painters and therefore most statues produced today have their eyes already painted.

The-Dharma-Store.com does not consecrate statues and our advice is to contact a Lama in your community to dedicate your statue according to the rituals of your school.

3. You have no solution to consecrate your statue

However, if the consecration of your statue is not possible in your surroundings, we are open to have it done for you. After you have ordered the statue, contact us to let us know of your situation. We are  connected with several Buddhist centres and if it is your wish, we can request the consecration of your statue before sending it to you. In this case, you have the choice to buy the kit from the-dharma-store.com or to send us your consecration kit. Before  making the request for consecration to the Lama, we propose you make a "suggested" donation which will be entirely transferred to the Dharma centre concerned. An email to you with the Dharma centre in CC will be transmitted to your for transparence. The consecration of the statue depends on the presence and availability of the Lama, it is possible that it takes 2 to 4 weeks. We will of course keep you informed during the whole consecration process.

Resin statues that are not hollow can not be filled but can be blessed.

All our objects are handmade. Each piece is unique and it is impossible to reproduce exactly the same. Slight differences may therefore appear in the shapes, proportions, colors and / or materials used in our descriptions and specification sheets.

The silver (metal) used in Nepal is always composed of an amalgam and is most often plated on metal parts. Most of the stores that sell 925 sterling silver products from Nepal are fraudulent!

Likewise, some stones considered semi-precious from Nepal or India are actually stones reconstituted from powder of semi-precious stones, such as turquoise or coral. Nevertheless, they seem to retain the properties of the original stones. In the case where reconstituted stones are used, we always specify it in the specifcation sheeet.

The items represented by this symbol are labeled "Monastery Quality" and are considered to be of superior quality in their category.

The items represented by this symbol are labeled "Best Value for Money" and are considered items that should not be lost.

Items represented by this symbol are labeled 'Gift Idea' and are considered ideal items to offer or to be offered!

Items represented by this symbol are labeled 'Exceptional Rare Item' and are considered items of great artistic value or antique objects.

Those products may also interest you

No reviews at this time.