The statues of the Buddha are so popular today that they are present everywhere on the globe: in restaurants, offices, gardens, calendars, etc. However, one must never forget the main message conveyed by these representations: the Buddha's teaching on compassion, love, generosity and understanding.

It is therefore necessary to pay respect vis-à-vis the representations of the Buddha as with any religious representation. We remind you here some ethical rules:

These are a few non-exhaustive rules of Buddhist ethics that you are free to respect or not.

It is important to bless and consecrate a statue to give it a "soul" and allow the energy of the deity to take place in the statue.

The statue, once consecrated, becomes a living entity and allows to bestow its blessings to the one wh 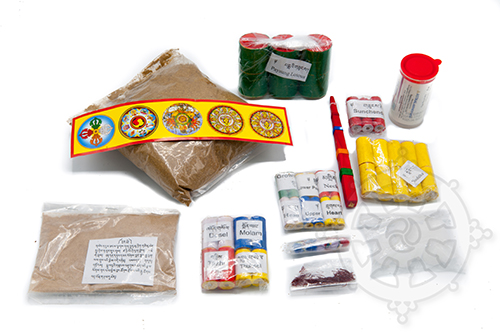 o possesses it. It becomes sacred and must always be respected as an incarnate deity. The consecration of a statue is most often done in a Buddhist monastery by a Lama(*).

The consecration is a Buddhist blessing ritual in which the statue is first purified. Then the object is filled with Himalayan sacred herbs, medicinal plants, incense, mantra, mandala, precious stones, relics, amulets and other small sacred objects ... Then a ceremony of blessing / puja is organized towards the deity so that the Buddha invests all his power and his benefits in the statue.

In monasteries, the consecration usually ends with the ceremony of the Buddha's eyes opening. It is a matter of opening the eyes and thus giving a soul to the statue by painting his eyes, sometimes accompanied by the hair. Nowadays, too few monasteries host master painters and therefore most statues produced today have their eyes already painted.

The-Dharma-Store.com does not consecrate statues and our advice is to contact a Lama in your community to dedicate your statue according to the rituals of your school.

3. You have no solution to consecrate your statue

However, if the consecration of your statue is not possible in your surroundings, we are open to have it done for you. After you have ordered the statue, contact us to let us know of your situation. We are  connected with several Buddhist centres and if it is your wish, we can request the consecration of your statue before sending it to you. In this case, you have the choice to buy the kit from the-dharma-store.com or to send us your consecration kit. Before  making the request for consecration to the Lama, we propose you make a "suggested" donation which will be entirely transferred to the Dharma centre concerned. An email to you with the Dharma centre in CC will be transmitted to your for transparence. The consecration of the statue depends on the presence and availability of the Lama, it is possible that it takes 2 to 4 weeks. We will of course keep you informed during the whole consecration process.

Resin statues that are not hollow can not be filled but can be blessed.